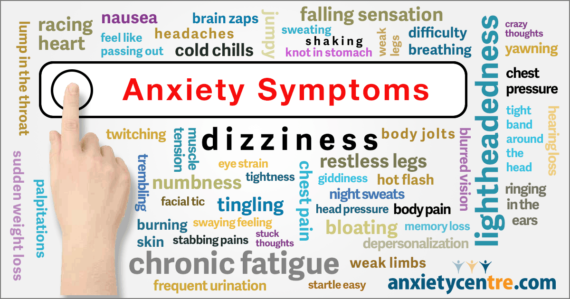 What are Anxiety Disorders?

Anxiety is usually described as a feeling of uneasiness that may occur for a number of reasons. Anxiety, in and of itself, is not bad because it is a normal human emotion and is felt during times of apprehension, stress, or feelings of danger.

Anxiety disorders are when a person has feelings of intense anxiety which don’t make logical sense and often interfere with that person’s ability to perform normal everyday tasks. These feelings of anxiety can happen at any time and for any reason, and the feeling is so strong that people with that disorder avoid all kinds of situations. The disorder can start at childhood and can continue till adulthood until professional help is administered.

All of these disorders have different triggers and therefore need to be clarified accordingly. Panic Disorder and Social Anxiety Disorder have certain conditions, but Phobias and Generalized Anxiety Disorders can manifest themselves in many ways. That is why it is not always possible to narrow down the causes of anxiety disorders unless you visit a professional.

The more common term for this disorder is a panic attack. This can trigger at any time you feel stressed and can even occur without any warning at all. This particular disorder often feels like a heart attack, but patients have also described it as being choked and being unable to breathe. This type of attack is accompanied by an irrational fear that overcomes the logic of your brain, and the patient gets the feeling of being terrified.

This particular type of disorder has seen surges in recent years, but no one is really sure why. The patients afflicted with this particular disorder have the feeling that everything they do and say is being judged by the people around them.

The key factor in this disorder is that the patient gets intensely overcome by the feeling that every single person around them is waiting for a chance to judge and ridicule them.

The trigger for this disorder comes most often when the patient commits a small mistake and feels as if the people around them have noticed what they have done and are now actively judging them for it. The patient also feels embarrassed about what they did when it is something trivial.

The phobias that exist in this world are so many that it would be impossible to list all of them. The basic premise for all the phobias is pretty simple and straightforward. The patient is terrified of something that may or may not warrant fear. That feeling of terror is so intensified that the patient will often refuse to take part in routine actions that would make them come in contact with any semblance of the phobia.

The best example of this can be claustrophobia1. Claustrophobia is the fear of enclosed spaces. A person with this phobia would ignore any enclosed spaces including elevators, and in some extreme cases, cars. This would lead them to avoid any situations which have those enclosed spaces and thus disable them from performing everyday actions.

The phobia disorders usually manifest themselves for things that do not warrant fear such as water or flying.

GAD is one of the most common that is present in today’s population. The worst thing about this disorder is that there are little to no triggers for this. A person with this disorder experiences stress and worry without actually knowing what is causing it. This can be extremely frustrating for the people afflicted with it because they will not know why they feel that way, only that they do.

Signs and Symptoms of Anxiety Disorders

There are numerous anxiety disorder symptoms. The first and foremost sign is the fact that the patient feels an intense feeling of worry and fear even though all logical facts would give the patient the evidence that there isn’t anything that is wrong with the situation they are in. This feeling will get so jarring that it will disrupt the patient’s daily activities and will not allow them to carry on with their normal lives. Other signs include:

Since no one actually knows what causes the onset of Anxiety Disorders, treatments are varied. Most people believe that anxiety disorders stem from a combination of external triggers as well as a genetic disposition to anxiety. The different types of Anxiety Disorders also cause the treatments to be so different from each other. Following are a few treatment options:

Aversion Therapy is most often used when combating a phobia. In this therapy, the patient is exposed to the object or experience that causes their fear. Through constant episodes, they learn that their fear is irrational. This also helps the patients in learning to control their fear and allows them to behave normally when faced with these fears.

This therapy is the one that has been let with the most success. Through this therapy, a psychiatrist helps the patient realize that the behavior they have is completely irrational.

Plus, with this treatment, the patients learn to recognize their anxiety attacks before they hit and that allows them to control the attack when it actually does affect them.

This therapy is often accompanied by the use of various medications which can help them keep their anxiety under control. Antidepressants and anti-psychotics often help in keeping anxiety disorders under control, but they must be administered by a professional.

IMPORTANT NOTE: The above information is intended to increase awareness of health information and does not suggest treatment or diagnosis. This information is not a substitute for individual medical attention and should not be construed to indicate that use of the drug is safe, appropriate, or effective for you. See your health care professional for medical advice and treatment. Please visit our about us page for more information.