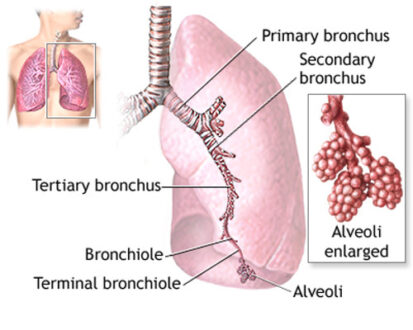 Wheezing refers to the tightening of the throat that leads to problematic breathing. The people who suffer from it are usually patients of one or another kind of respiratory disorders or diseases. Due to a tightened throat, the patients suffering from the problem of wheezing make whistling sounds with every breath. It also causes shortness of breath or difficulty in breathing. The throat tightening can happen due to inflammation or blockage of the airways, which can be a result of various disorders that are mentioned ahead.

There are several reasons, and they are classified into two depending on their causes. The first type is mild wheezing, which is not a very serious condition and can be caused by either cold or upper respiratory infections1. This kind is not dangerous and can be easily and quickly treated. However, if the wheezing is recurrent and intense, it is recommended to see a doctor.

Intense wheezing, which is the other kind, can be dangerous if not treated at the right time. It can be caused due to the following conditions:

There are several wheezing symptoms that can raise an alarm for the patient. When encountering the wheezing symptoms mentioned below, it is recommended that you immediately go to a doctor and start your treatment as soon as possible, because in some cases, it can prove to be fatal too.

The most common symptoms that one can use for identification of it are difficulty in breathing, irregular breathing patterns that may include rapid breathing and shortness of breath too, tightness in the chest, and a bluish tint to the color of the skin.

Wheezing as a symptom:

However, there are some remedies that can reduce it to a great extent or even cure it. But with those remedies, it cannot be said for sure that they would cure the reasons for it too. Since they are the remedies which are used as a treatment for this problem, they shall (mostly) cure wheezing only, and you’ll have to go for other remedies to treat the condition itself. Some of the remedies that are easy and applicable are given below:

Steam inhalation can be an effective way of curing. Its method includes inhaling the steam coming out of hot water in which menthol, peppermint essential oil, and eucalyptus oil can be added to make the steam more effective. Using these natural ingredients can speed up the recovery process.

Hot drinks mixed with a tablespoon of honey can reduce inflammation which will reduce it caused to due inflamed airways.

Breathing exercises can also reduce wheezing caused due to COPD.

Use of humidifiers can also prevent because it is worsened by dry air.

Unfiltered or polluted air can lead to worsening of wheezing or may become the cause of it in the first place. So, cleaner air can help reduce it. Keeping the triggers of it away can help magnanimously. It is mandatory to figure out which things trigger wheezing, so you can stay away from those as well as the condition of wheezing.

Since it is also caused due to certain allergies or viral infections, the medication for such allergies can help reduce it as well.

Bronchodilators are medications used to relax the lungs and stop the narrowing of the airways.