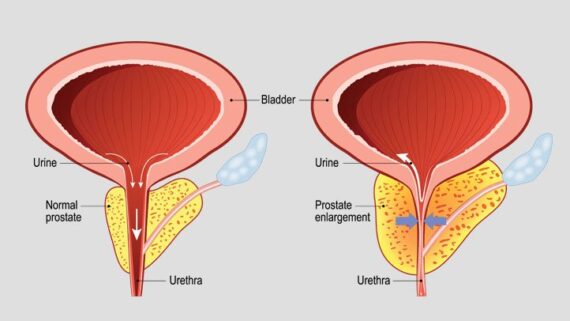 What is an Enlarged Prostate?

The prostate is an integral part that is located inside the male reproductive organ. It is a small, muscular organ which makes the margin of the urethra. The prostate is behind the making of the fluid of the semen. Also, its muscular characteristic aids in the ejaculation of fluid and semen out of the penis during sexual intercourse.

Prostate enlargement is a common problem found in men, especially who are above the age of 60. An enlarged prostate starts to develop when there is an increase in the number of prostate cells in the male reproductive system which lead to the swelling and enlargement of the prostate.

This blockage may cause a urinary infection to develop which may further aggravate the enlargement of the prostate. Another cause of an enlarged prostate is age. As men grow older, their sex hormones may become unbalanced. This can also lead to the prostate increasing in size.

There are two basic types of an enlarged prostate; benign prostate and malignant prostate.

As such, there is no set explanation as to why the prostate gland of men starts to increase in size with age. However, the most common reason for benign prostatic hyperplasia is the imbalance of sex hormones.

Prostate cancer or a malignant prostate is also known to cause lumps and masses in places in the human body where it spreads. This malignancy of the prostate then also interferes with the normal functioning of the tissues and other parts of the body, hence, ultimately affecting the overall health of an individual.

Signs and symptoms of an enlarged prostate

Treatment of an enlarged prostate

Enlarged prostate treatment has to begin somewhere. That “somewhere” can be the first step that you take towards taking care of yourself. Following are some of the natural remedies, medications, and surgery options that can be considered for the treatment of an enlarged prostate.

The prostate tissues are shrunk in size with the aid of radio waves.

The prostate tissue is reduced in size by using the energy similar to which is present in a microwave.

The prostate tissue is limited in size by using warm water therapy2.

The second option is going for inpatient therapy. This includes:

The inner section of the prostate is removed via an incision in your abdomen.