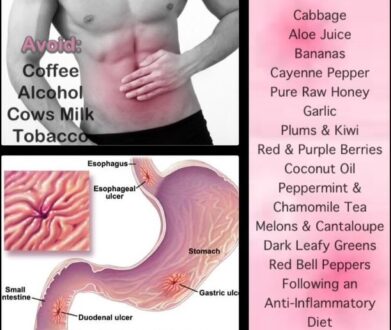 Stomach ulcer, also called gastric ulcer is a medical condition which causes painful sores in the stomach lining. Stomach ulcers are classified as a peptic ulcer disease. Peptic ulcers affect the small intestine as well as the stomach.

They can be treated easily; however, the condition can become much severe if proper treatment is not followed.

It was previously believed that they were developed due to poor lifestyle habits, genetic predisposition to excessive stomach acid secretion, stress, and consumption of large amounts of caffeine, tobacco, alcohol, and rich and fatty foods. It was believed that these factors contributed and resulted in a buildup of stomach acids which eroded and damaged the protective lining of the duodenum, esophagus, and stomach.

Although excessive stomach acid secretion certainly contributes to the development of ulcers, recent studies have shown that bacterial infection is the main cause of peptic ulcers.

Several other studies have also shown that peptic ulcers are more likely to form in older people. This can be because arthritis is common in the elderly and daily doses of ibuprofen and aspirin are taken to relieve arthritis pain.

A peptic ulcer is a break or hole in the protective lining of the upper part of the small intestine (duodenum) or the stomach. Peptic ulcers are generally classified into three types:

Gastric ulcers are ulcers which form inside the stomach.

More common than stomach ulcers, duodenal ulcers form in the upper part of the small intestine or the duodenum.

The rarest form is the esophageal ulcer which develops in the swallowing tube or the esophagus. They are often formed due to exposure to medications like anti-inflammatories or antibiotics and due to alcohol abuse.

Signs and symptoms of stomach ulcers in adults

There are several symptoms of stomach ulcers in adults, the most common one being burning abdominal pain, extending from the navel to the chest. The abdominal pain can vary from mild to severe. In certain cases, the pain might even disturb your sleep and wake you up at night. However, people suffering from small peptic ulcers might not experience any symptoms during the early phases.

How to get rid of Ulcers

Treatment depends on its cause. Most ulcers are treated and cured with a prescription of certain medications from your doctor. However, in certain rare cases, surgery might be necessary.

It’s essential that you treat this ailment immediately. However, make sure you don’t treat the it yourself without consulting your doctor first. Acid blockers and over-the-counter antacids can help alleviate some of the pain, but the relief is only temporary. However, with medical attention and help, you can find relief along with a permanent cure for the disease.

It is advisable to discuss a treatment plan with your doctor. If you’re suffering from an actively bleeding ulcer, you’ll have to be hospitalized for intensive treatment with IV ulcer medications and endoscopy. A blood transfusion might also be necessary.

If your stomach ulcer is caused by H. pylori, your treatment will consist of antibiotics and medications known as proton pump inhibitors or PPIs. PPIs work by blocking the stomach cells which produce acid.

Along with these treatments, your doctor or healthcare practitioner might also recommend:

The right treatment can help control and ease ulcer symptoms quickly. Make sure you continue taking the medication prescribed by your doctor, even if the symptoms disappear. This is particularly important with H. pylori infections, to ensure that all bacteria is killed.

In certain cases, surgery might be necessary to treat a complicated stomach ulcer, especially if the ulcer:

How to prevent Ulcers

Be careful when taking pain relievers.

Patients suffering from arthritis and other medical conditions which cause chronic pain, often take non-steroidal anti-inflammatory drugs or NSAIDs for months and weeks to alleviate the swelling and pain. These pain relievers can have a negative effect on the mucus which protects your stomach from acid, increasing your chances of developing peptic ulcers.

These pain relievers include:

To lower the chances of developing peptic ulcers while taking NSAIDs, it is advisable to take the lowest possible dose to ease your symptoms. Take your medication with food and stop taking it as soon as you don’t need it. It is also advisable to avoid drinking alcohol while taking these medications.

Although food won’t cure or cause stomach ulcers, a healthy diet can greatly benefit your intestinal tract and general health. Furthermore, there are certain foods which help eliminate H. pylori and boost your body’s own healthy bacteria. It is advisable to follow a diet with plenty of vegetables, fruits, and fiber.